Well the race is run, did I achieve my goals?  At the time when I finished I was a little disappointed (even jaded) with my performance, however upon reflection (which is the main reason I blog) I couldn’t be happier with how the day panned out, as an athlete and a coach! So let’s hook straight in, my result can be found by clicking here! 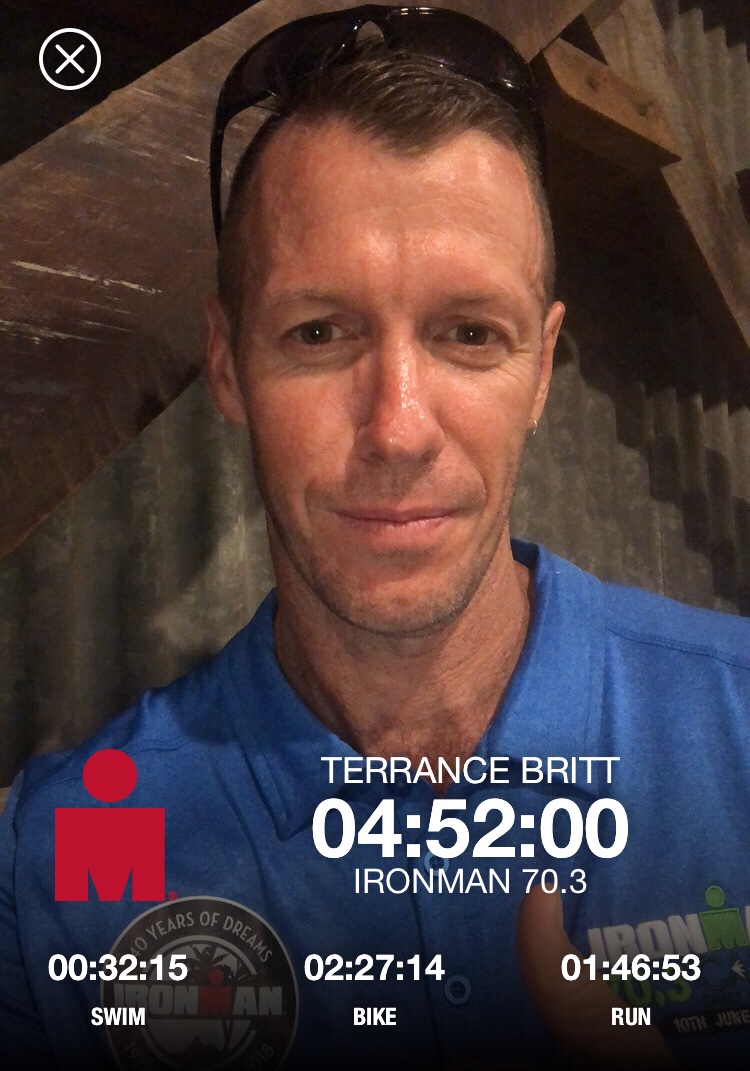 My goals as outlined in my race preview (and subsequent result) were as follows:

I attended the presentations and roll down to show support for my fellow competitors with no intention or expectation of qualifying for the 70.3 world championships in South Africa (in 2 months). As it played out none of the 6 finishers ahead of me wanted to take their qualifying spot, so after a few frantic calls to my family I took the first allocation in the 40-44 male category! OMG, IM OFF TO THE 70.3 WORLD CHAMPIONSHIPS IN SOUTH AFRICA!

I was lucky enough to receive my qualifying medal from the Cairns IM ambassador Liz Blatchford, a real privilege and honor! Oddly enough I have never been lucky enough or maybe that’s fast enough (or financial enough) to qualify for any Australian team, but the stars have aligned and here we come South Africa!

So let’s get back to the weekend! I flew in on the Friday, with Matt (the first time 70.3 athlete from my squad) picking me up from the airport! We checked straight in to our hotel (early) just to leave our bags and car. We then spent the rest of the morning checking out the expo, merchandise and registering for our race! We had lunch and headed back to the hotel to set up our bike and check everything traveled smoothly!

Our first little hiccup, Matt’s beloved Isabella (the IA Felt) DI2 gears were not changing, so we tried charging for an hour but got no where, so we raced down to the amazing guys at the SRAM mechanical tent who fixed everything up in a jiffy! Isabella was back to normal and ready to ride, crisis averted!  Friday night was spent with fellow Starfish athlete Chris Gilmore going over his Ironman plans, this is his first (& I’m suggesting it won’t be his last) crack at this distance. His new Diamondback TT machine is an absolute WEAPON, and traveled safely, needing only some minor gear & break adjustments, which we arranged to occur in Palm Cove at bike check in on the Saturday!

Saturday morning Matt, Kingsley (another Starfish athlete who came to Cairns to support Chris) and I decided to head to parkrun, a nice leisurely 5km to loosen the legs I find a must before any endurance race!  We ran a steady 25 minutes and chatted the whole way!

We headed to breakfast before suiting up to roll on the bike to Palm Cove. This is a different feature of this race, split geographically transitions! Matt & i rolled on our bikes the 30km very gently with a very nice tail wind from Cairns to Palm Cove, very conscious not to waste too much energy! Kingsley and Chris drove to Palm Cove and organized the tune up of Chris’s bike before we arrived! 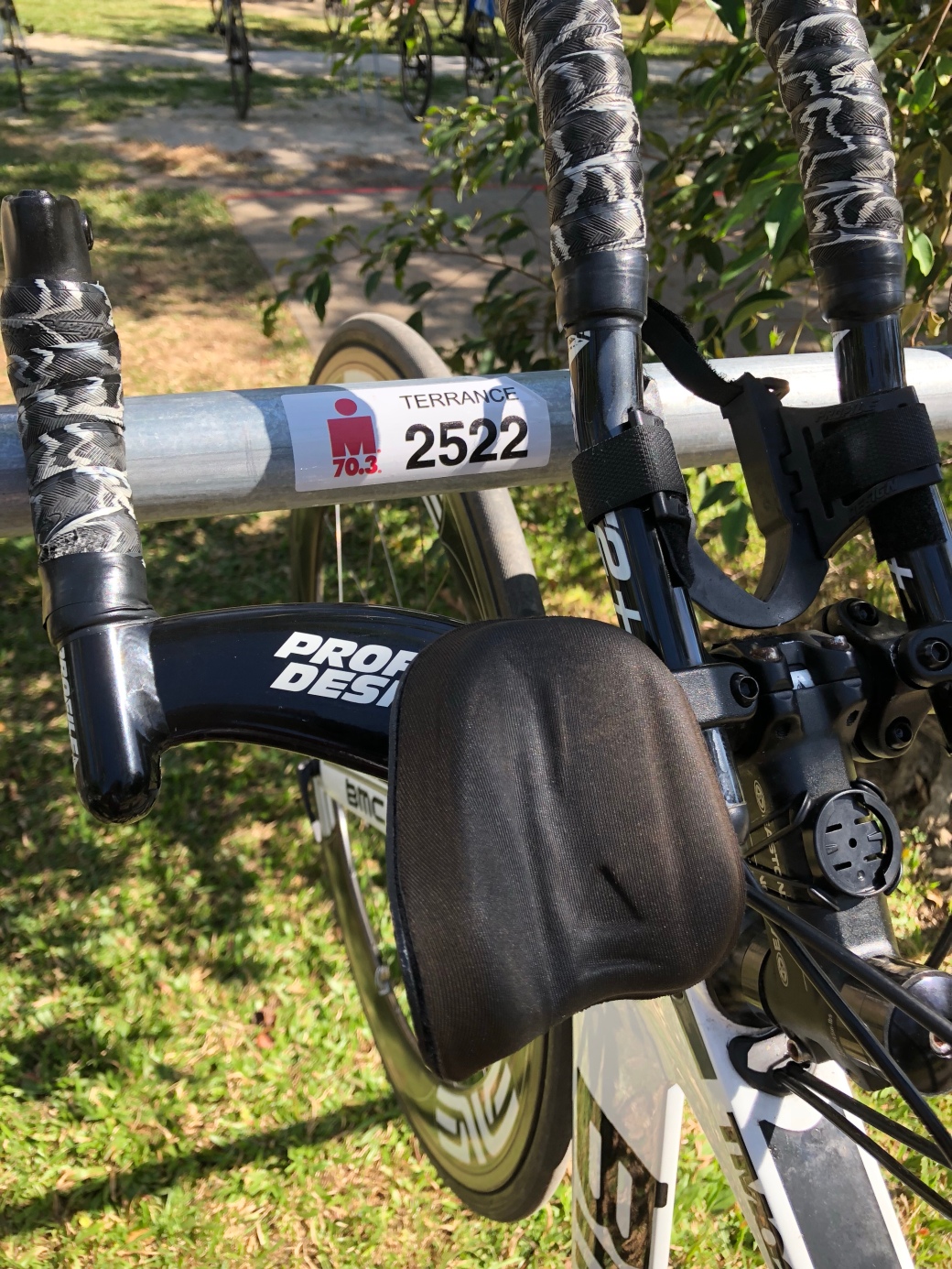 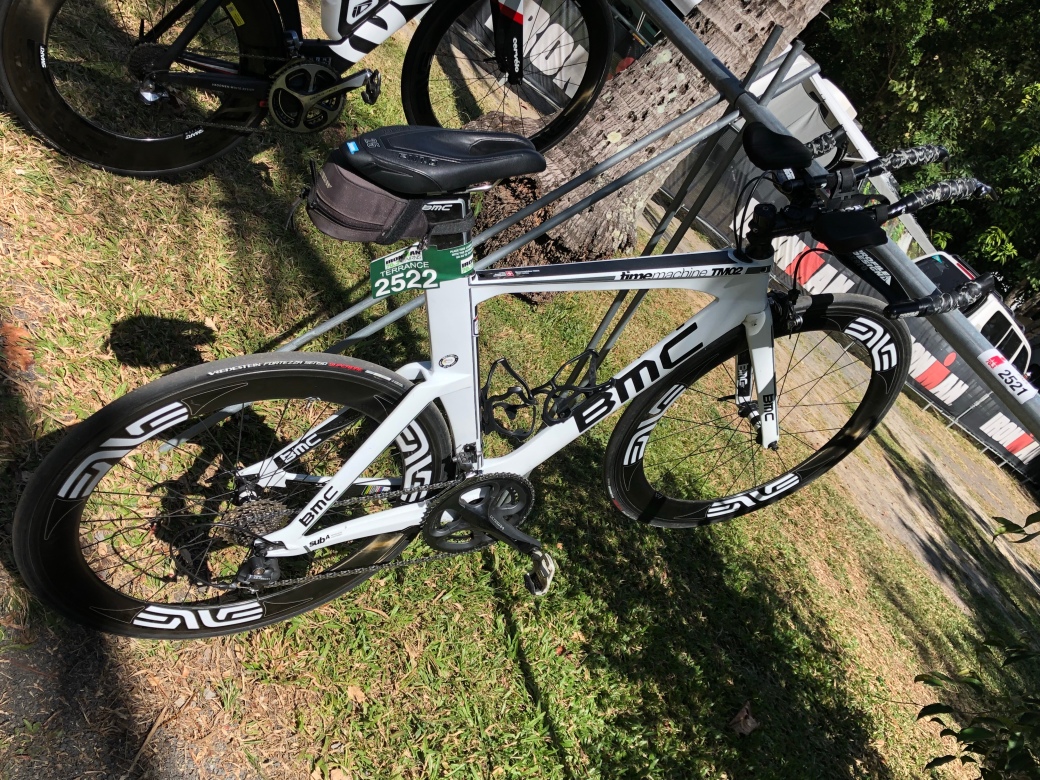 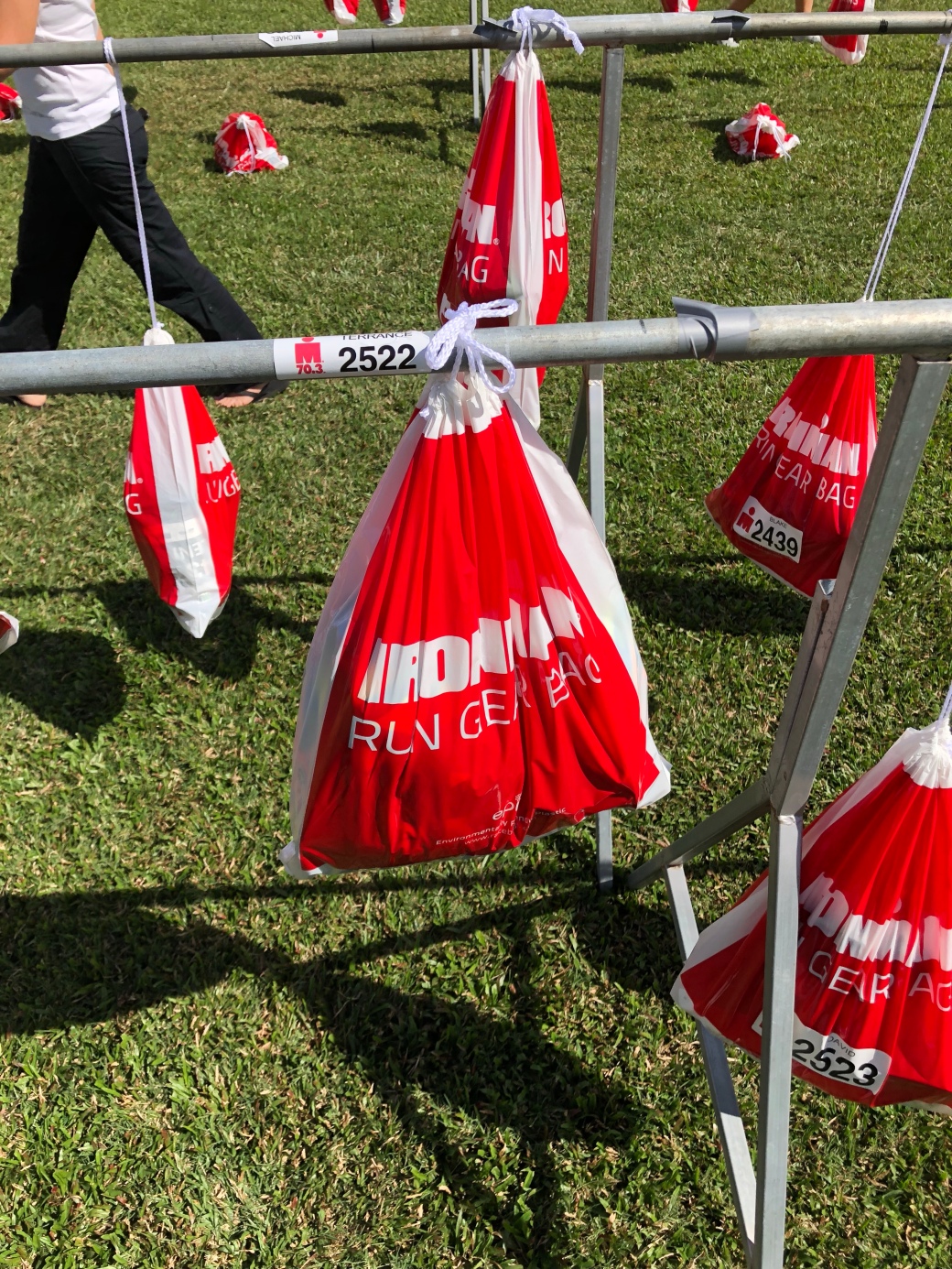 We all racked and headed back to Cairns to rack our Red Run bags, then have some lunch. We then had a very relaxed afternoon around our respective hotels. Matt and I put the Thera Gun to good use and had a spa to loosen up and stay relaxed! I was battling some serious indigestion problems and had to find a chemist to get some Nexium to help settle my stomach (minor hiccup number 2)! Crisis averted finding a 24 hour medical center with a chemist attached! We ended in bed a little later than planned or Perfect, but really I find I rarely get a great nights sleep before a big race!

Race Day, Sunday was an early start 3:45 for me! Giving me time to have a shower, apply tattoos and suit up! I again had my go to breakfast of French toast (eggs bread) & banana. Matt almost followed suit! We met up with the others around 5am and headed to Palm Cove by car. Upon arriving the announcements started that the 70.3 transition needed to be cleared! We seemed to left our run a little late, but we remained calm and went about the process of pumping up tires and setting up our hydration and nutrition! As we left transition Matt realized he had lost the visor to his helmet, which there was nothing we could do about in the dark, very disappointing! We swapped our clothes for our wetsuits and dropped our street gear bags into the blue tubs at the transition exit! This is where hiccup number 4 became evident, I had lost (missed placed) my timing chip! I stayed calm and got my wetsuit on before heading to the info booth to find out what I should do! I was referred to the start line where Sue (an amazing Ironman Staff member who I’ve known for a few years now) was able to hook me up with a replacement chip & even notify official timing of my change so the tracker would still work! Crisis averted!

All that was left now was to race! I hung at the start line trying to find Matt, but after letting more people through the rolling start than I like I decided to jump in and hope Matt was ok! I gave Peter Murray a huge bear hug as I ran from the funnel toward the water! I hit the water and it was go time! WOW, it was a lot rougher than it looked from the shore! I focused on finding the buoys and trying to swim with high recovery to avoid the chop! I knew it would get easier after the turn around point and was pleased to get there! I coped a fair hit to the face and my goggles came off at the turn around, so a quick stop to fix them and then time to ride the current, wind and chop back to the swim exit as fast as possible! I exited in 32 minutes a little disappointed but with a belly full of salt water I was satisfied to have only dropped 2 minutes! 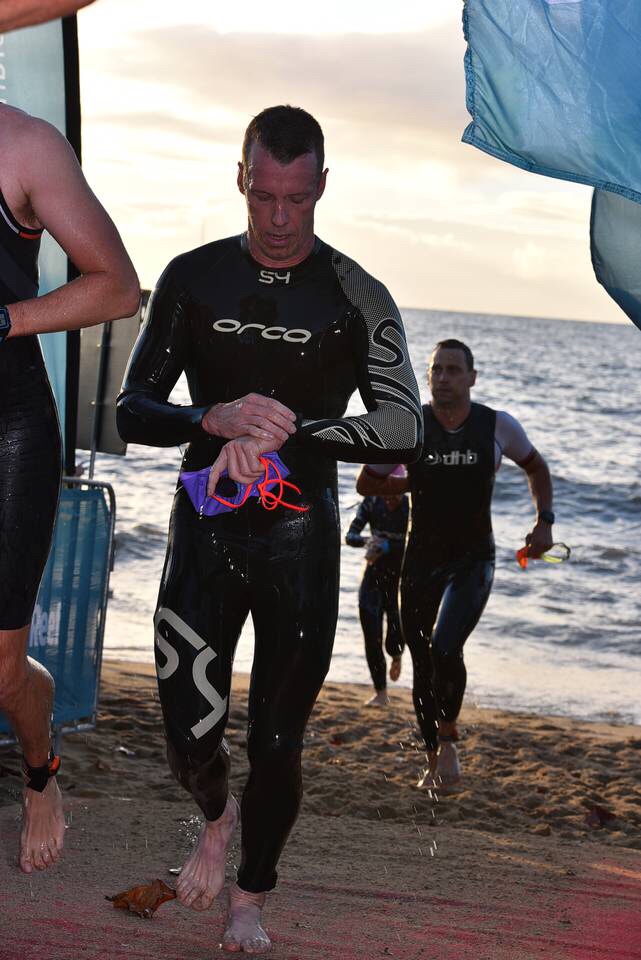 T1 is so different at this race, I stripped my wetsuit off and put my helmet and glasses on and had to stuff my wetsuit, cap & goggles back into my blue bag and leave it under my bike rack! So never going to be my fastest transition, but I got it done in a timely manner and headed to the mount line! I am always amazed at the time people take to mount their bike, as I jumper on my bike I think I passed 3/4 people at the mount line. I rode up the street and put my feet in my shoes while rolling along!

This bike course is truly one of the best on the Ironman circuit! As normal we were blessed with a tail wind on the ride north and a head wind on the longer run South back toward Cairns! I watched my Pierre number trying to stay within my 210-220 goal! The head wind was a struggle but not enough to slow my progress too much! 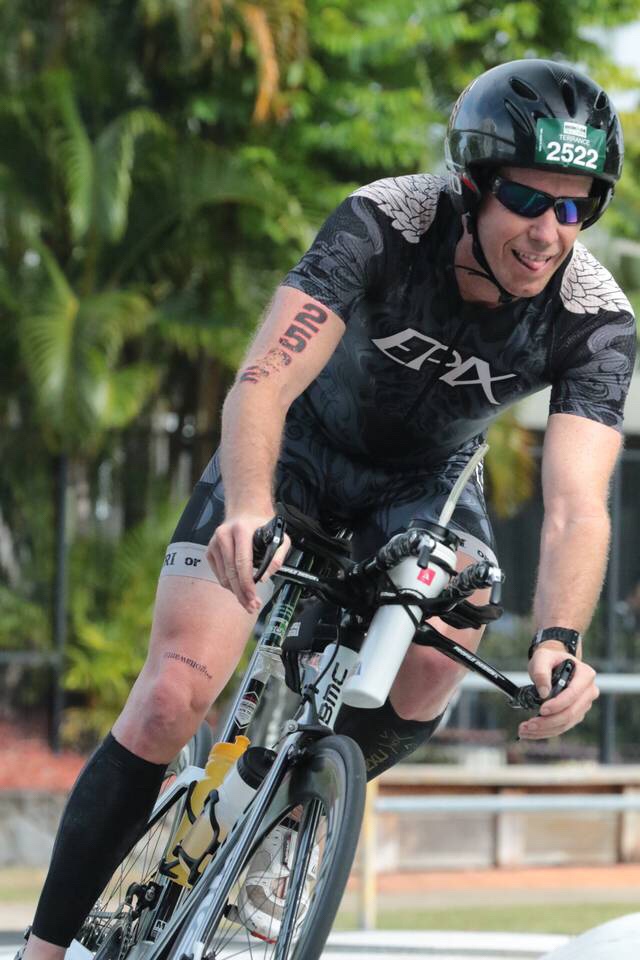 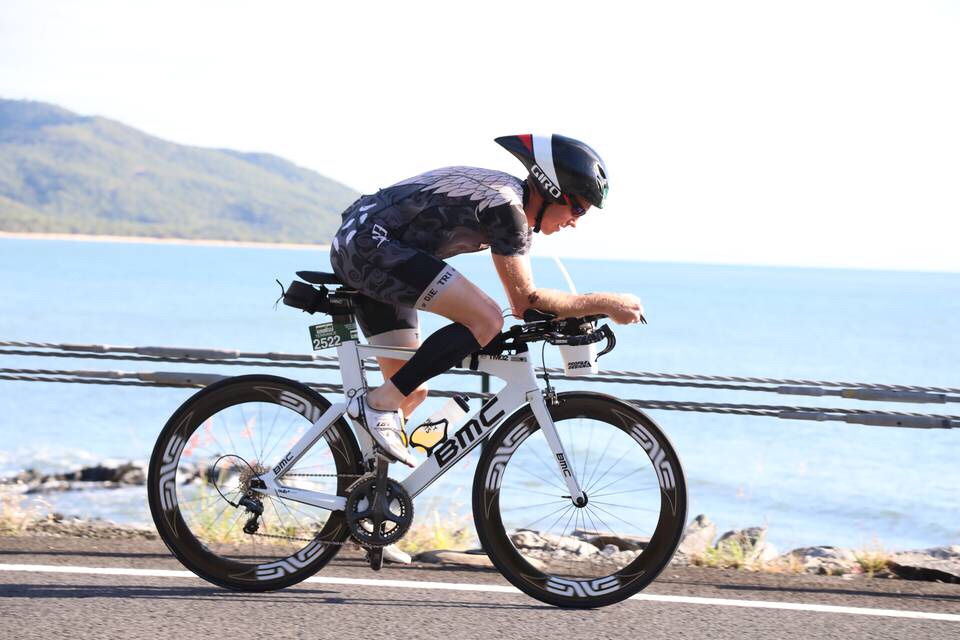 I rolled into T2 with my tail up, I had ridden a sub 2:30 bike stopping my watch at 2:27! In T2 my bag was tied to my rack position in a neat little bow which was easily undone and fell to the ground allowing me to rack my bike first! Trying to put my sock and shoes on I found my hips suffering a little cramp! I grabbed my hot shots out of my bag, threw my cap on and started the run out of transition! Cracking the lid on my hotshots, I chucked it down as I left and grabbed a cup of water to wash it down! 21.1km to go!

I need to set the tone and pace of my run early so I hit the road quick over the first couple of km, banking a couple of 4:30min/km before the pain and real struggle started to kick in! My times slowly drifted out to 5min/km and beyond at times. I switched from ice & water to Coke about 10km into the run and stayed on that for the rest of the half marathon. I also switched my watch to overall time at the 12km mark and decided to watch that trying to get under the 4:50 goal. I crossed the line in a half marathon time of 1:46 and overall time of 4:52. 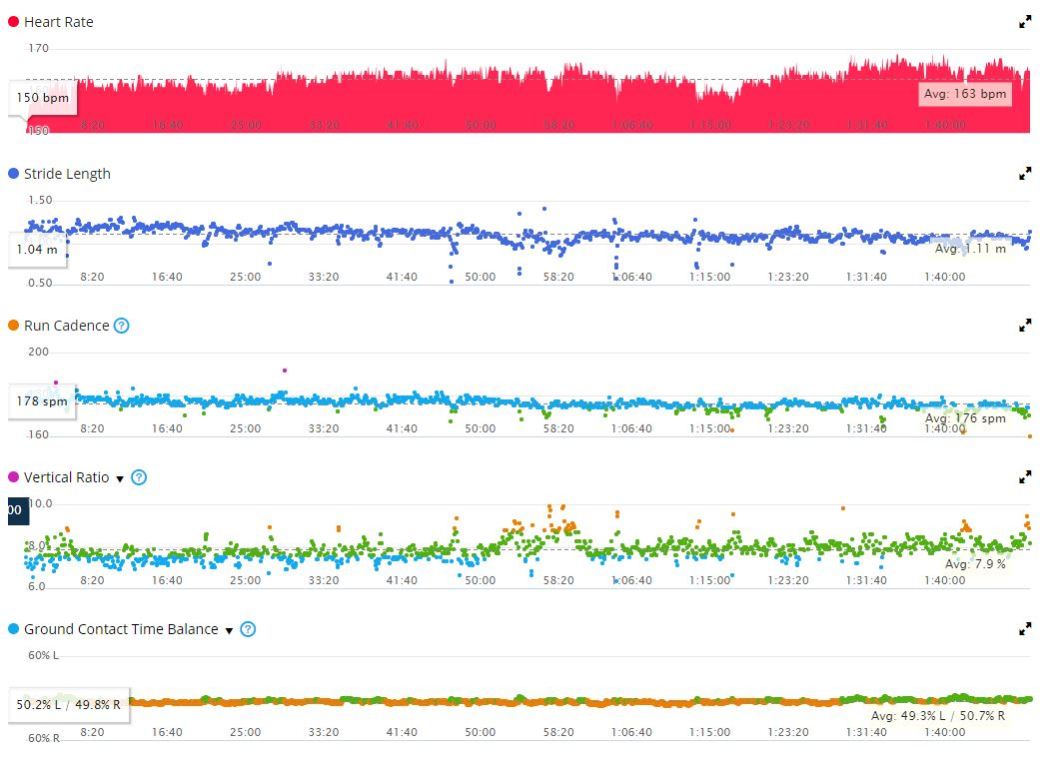 At the time I was a little disappointed with my efforts, but that was what I had on the day, it was the best I could give! Now my focus switched quickly to seeing how Matt & Chris we’re going! I grabbed my street gear bag, found my phone and started the tracker to see how they were going!

I had seen Matt on the bike and only once on the run, he looked solid and seemed to be running well! I meet him at the finish line (in recovery) 5 hours and 33 minutes after he started! His first dabble at this distance and he smashed it! His focus is now on another 70.3 in the Philippines in August, so his recovery and program will be managed between now and then! This was the perfect learning experience for him and sets him up well for a great performance in the Philippines!

After a massage, a shower back at the hotel we set up our afternoon ready to watch Chris crush his marathon and Ironman! We had a quick bite to eat and watch Chris zoom into T2 looking comfortable! We raced over to the exit of T2 and cheered Chris out onto his marathon! He was in great spirits and was running well! As with every Ironman the lows came and Chris handled them like a true professional doing what he thought best to improve the situation! He cruised to the finish in 11:36 minutes, an epic first Ironman time! I can’t wait to continue to follow his journey into the amazing world of Ironman triathlon!

I went back to the finish line and watch the finishers from 14 hours to 15 hours before finally retiring to bed! The emotion at that finish line is unrivaled and something I use as inspiration in my own daily struggles!

Links to the details and full stats for those interested:

Now my planning for a tilt at the World Championships in South Africa need to be on hyperdrive! Keep following for updates this is going to be a wild ride! Super excited to be representing Australia at this event!

If you ever have any questions please reach out, I’m only a message away.

If you’re not active at the moment & need some inspiration, follow me on Strava, Instagram and like my facebook page and let’s get back out there swim, bike or running.   Make sure you subscribe so you never miss a blog post from me!  The biggest regret we can have in life is to not TRI!