So that’s a wrap, Noosa 2016 done and dusted!  Lets get straight into the results:

So the following is a quick comparison of my most recent results here at Noosa over the past 5 years.

While I could delve into the reason & give plenty of excuses why my swim was off this year, I wont.  What it has confirmed for me is that triathlon is a 3 discipline sport and there is no room to neglect, or even rest on your laurels in any individual discipline.

So here’s a break down of my day, which started at 4:10am with a quick shower and breakfast of french toast (eggy bread) with banana and maple syrup.  We headed to transition for a 4:45, as soon as it opened.  A slight surprise to learn that we needed our helmet (as normal) and timing chip on out left ankle to enter transition.  Adjustments made and into transition to set up we went.  Tyre’s pumped up, shoes clipped in, nutrition setup, bike racked by the seat (left hanging in the breeze, as my front wheel doesn’t touch the ground), towel laid out, running shoes, socks, helmet, sunglasses and number belt all set up in the order I like them.  A quick mental visualization of my transitions to ensure I hadn’t forgotten anything.  Satisfied I had everything, it was time to head back to out unit!

With the water temperature being measured at 24.2 the no wetsuit ruling was made.  No real change to my plans, I had almost expected this call to be made!

The water conditions were perfect at the start a slight northerly (maybe north-easterly) made it a little lumpy, but very bearable early (it apparently got worse as the morning went on)!  Entering the holding zone and up to the front row on the far left next to my fellow Redline teammates, Renee (who I grew up with) & Richard!  The gun went & I chased (or followed) Renee, who was showing off her surf skills, into the water!  I love the premium mates wave, as I never seem to have any difficulty finding clean water and very rarely have trouble with other athletes swimming on top of me.  Rounding the first buoy I checked my watch, it was reading 6 min.  Time to put the head down and get going.  Focusing on a long steady stroke rate I thought I was doing pretty well, felt good in the water and should be on-target when I exit.  Rounding the last buoy I was hoping for a little swell to help me to the beach, but ended up swimming the entire way, until my hands touch the bottom!  Standing up to run up the beach with cap and goggles now in had, I crossed the timing mat and lapped my watch and glanced down in horror.  It read 27 minutes, that’s 4 minutes down on what I had predicted & hopped!

The run to transition became a trudge as I examined my effort in the water, doubting myself and seeking answers for my poor time.    This 2 minutes 30 seconds seemed like a life time, questioning every stroke, did I push hard enough, was my stoke rate high enough, was my stroke long enough?  Too many questions, and no answers here?  A quick reminder to myself that I still had a bike & run to complete and it was time to let the unhelpful negative thoughts go and focus on what I could control right now!  Completing a running jumping flying mount onto my bike it was time to work!

I know this course very well, it’s exactly 11km to the base of ‘Garmin Hill’ a 3km segment which is timed and there is prizes for the fastest up each year.  From the top of this climb there is about 7km to the turn around at 21km near Cooroy.  Then the super fast decent and return to Noosa.

This year seemed a little different, a slight tail wind on the way out, made for some fast splits on the way to the turnaround.  The decent is always a sketchy place to be, I positioned myself about 20/30m behind the closest rider and had no one behind me and just let my beautiful BMC (& ENVE) wheels do their thing, I maxed out at 77.7km/hr, without even trying & into a head wind.  Opening the mouth and getting the flapping cheeks at one point gave me a wry smile!

Being one of the first waves in the morning to start the race behind the opens and pro field, means the ride is generally a little quite and no much drafting.  But watching the course fill up heading out is always good fun.  I knocked back 6 (individual) shot blocks during the ride, spacing them out evenly over the hour and continually drank my Endura mix running out inside the final kilometers (perfect)!  The ride along Noosa Parade get the adrenaline going again, the crowd is in full swim and the pros are generally getting close to finishing!  I always wait until the final bridge at the Sofitel to take my feet out of my shoes ready for the dismount.  A smooth dismount, lap the watch at 1:04 hours with a satisfied feeling, approximately 1 min quicker than last year!

This transition was a little more focused and driven, however I was clearly working hard on the bike as I had some difficulty getting my socks and shoes on.  This year I decided to trial a Hot Shot in transition, these are not available in Australia, but I had read good things about their ability to keep cramping away and being susceptible to cramping I thought why not give it a go!  WOW, this is like taking a shot of tequila, it was warm all the way down to my stomach.  Did it help, hard to tell, but I can categorically say I didn’t cramp during the run!

By the time I left transition, the race had been won by  Dan Wilson and the commentators were preparing for the women’s winner Ashley Gentle to enter the final kilometers.  I had 10km in front of my, and needed to get my skates on and make this as fast as I could.

With my fastest split at 4:20 and my slowest at 4:40 I am pretty satisfied to cross the finish line  with a 10km run of 45:39!  A 45min 10km run is a super result for me and I am very happy given the injuries I have overcome in the past two weeks to get to this start line.

So crossing the line was bitter-sweet for me and the run split was very satisfying, however my overall time of 2:23:19 was a little disappointing.  Heading to the watermelon I got discussing with other athletes their results and everyone was talking about the long slow swim.  While this made my result a little easier to swallow I am ruing the missed opportunity to get under that 2:20 barrier. 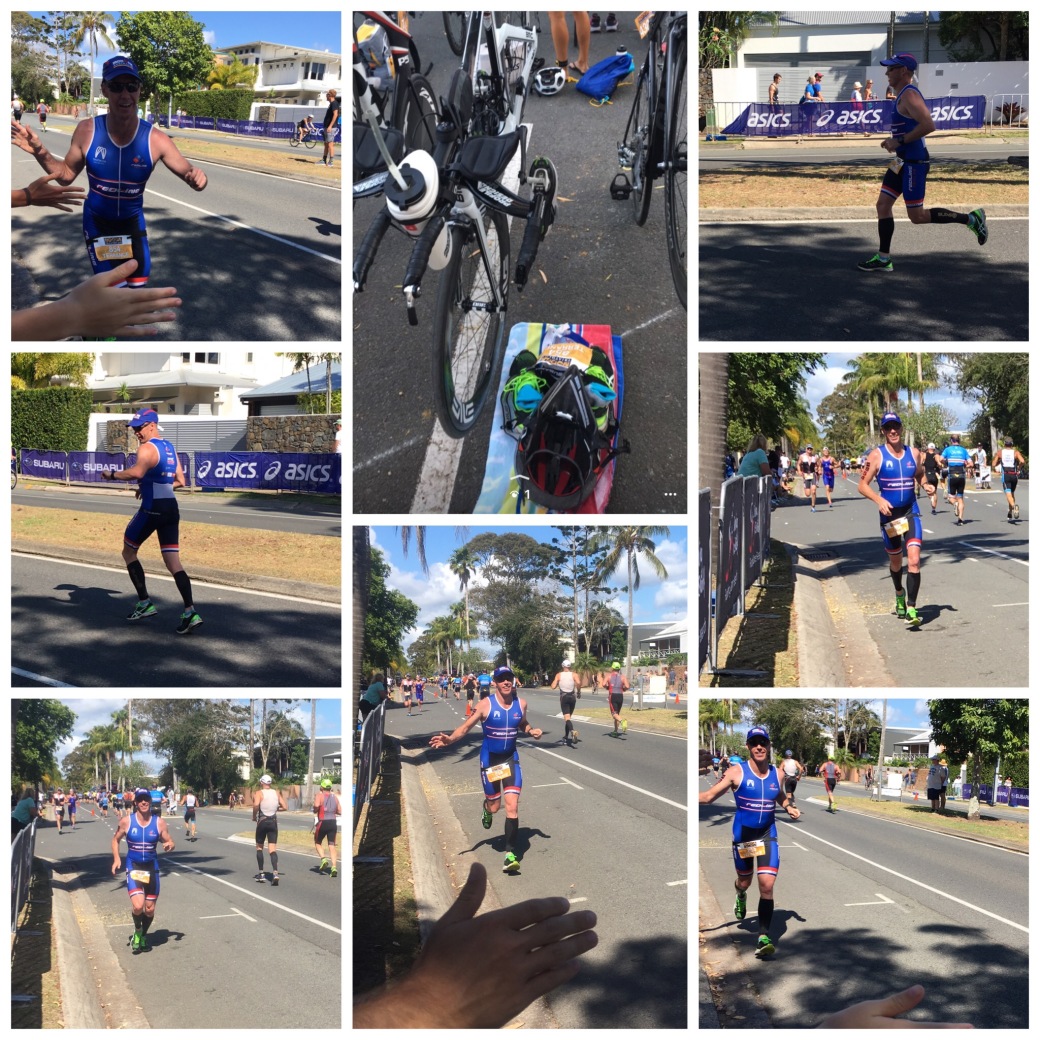 So while the result didn’t go my way I am very satisfied with my bike and run legs and will take solace that there is still some improvement in me yet.  So no my focus turns very quickly to recovery and banking some ks to prepared for Challenge Shepparton on the 14th of November.

I also need to give a quick shout out to a few awesome friends that race and recorded some epic time, Ben Hyde crazy fast run leg was inspirational to watch, his sister Emily Fenton who continues her rise into the sport and similar to me improvement in 2/3 legs was good to see. Ian Donald, my IM training partner, who completed his first ever Noosa triathlon and banked a very respectable time.   A huge shout out to my fellow Redline team mates, Renee, Iain & Richard on their own personal Noosa training camp, to Coach Karen for winning her age group and Peter Matthews for entering the legends hall of fame with 20 Noosa races complete!

This is an event I haven’t competed in since 2011 where I clocked a tardy time of 19:45.  The goal was simple, beat that time, which I did, clocking 17:21 in pretty trying choppy conditions.

No my fastest swim, but I felt comfortable enough and was happy for the hit out before Sunday’s race!

This is always a highlight, the smiles and joy make the effort so worth while.  These kids are the future of this sport and to see them enjoying every moment is magical. 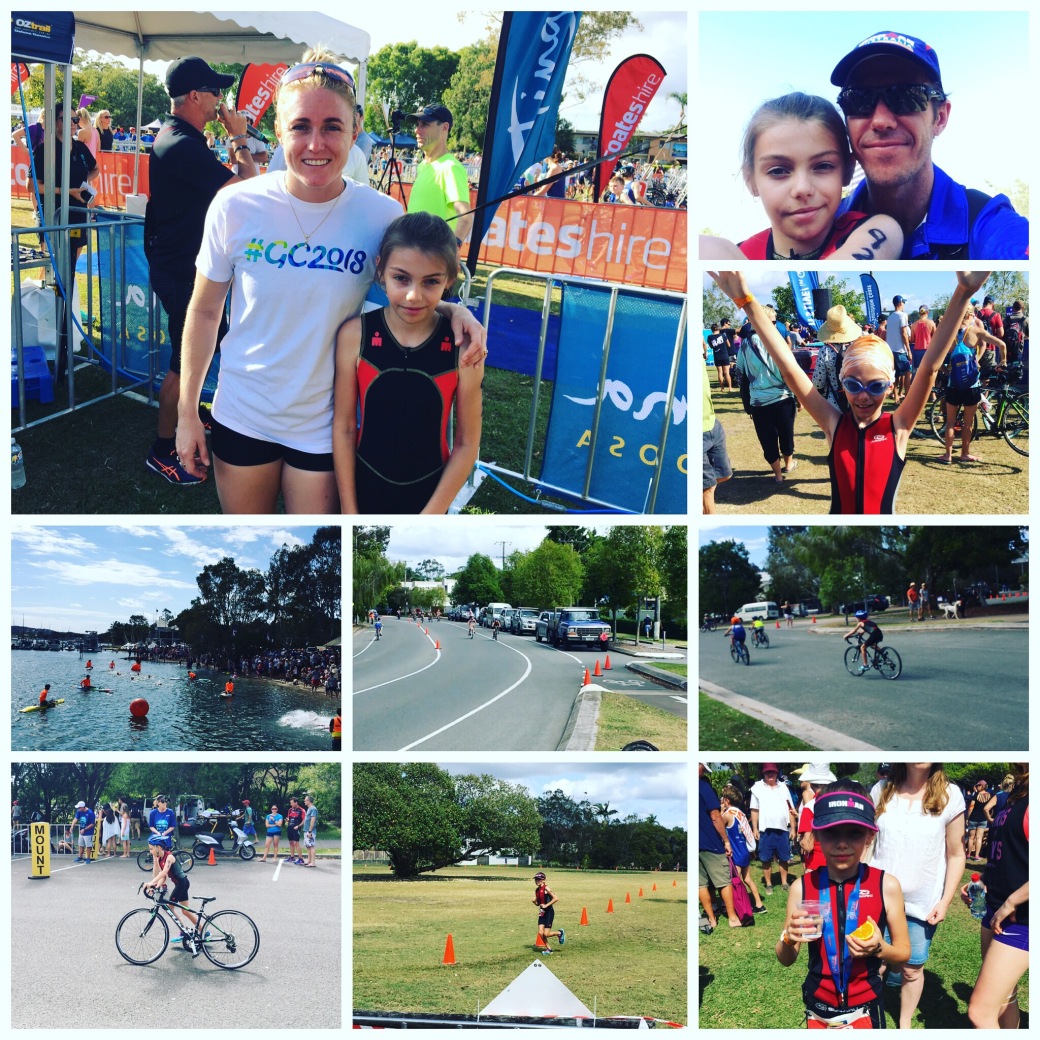 As you can see by the photos, Ella had a ball, swimming, cycling and running her way tot he finish line & getting to meet two Australian Legends in Sally Pearson and Steve Moneghetti.

So that’s a wrap, Noosa 2016 is done & dusted.  Not my perfect weekend, but hard to go home disappointed when you can visit a beach like this every day!

Keep your eye peeled my preview of Challenge Shepparton is coming along with a few product reviews of my recent purchases.  It summer and its race season, I love this time of year.

I also need to give a huge thank you to my amazing supportive wife and children, they give up so much to allow me to pursue these crazy desires to keep racing triathlon’s.  I’m no super star, but I’ll keep trying and if I can win by racing fast enough, maybe I’ll out live all my competitors and become a super star by default 😉  I hope and pray that my efforts do make you proud in some small way!

The biggest regret we can have in life is to not TRI!